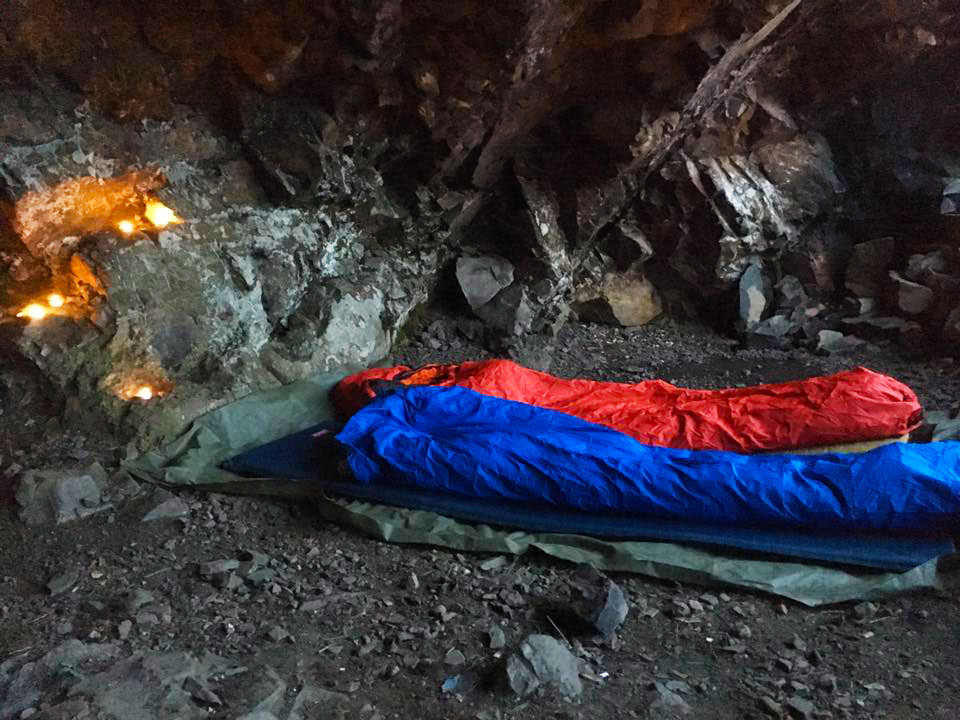 With our Alpkit bivvi bags having been sitting amongst our kit new and unused for 4 months, it seemed only fitting that the trip to celebrate J finishing university should finally put them to use.

It was a quick Friday getaway after the final exam and after loading up with plenty of nutritional (yeh…) supplies at ASDA, we were on the road to the Lakes. The real success of the weekend was the car making it over the Kirkstone Pass *breath collective sigh of relief* but we decided to keep going after this heady achievement nevertheless and made our way to a little car park just off the A592, tucked away next to a little stream from Brotherswater.

Having never really done an overnight bivvi self supported before, we tried to be methodical and smart about what we were putting in our pack (the 100 mini Reese’s cups and the bottle of champagne were essential items, I promise…). This exercise in packing light was hampered a bit by my resolve that I would probably never do anything like this a few years ago when I bought my thermarest and sleeping bag – warm and comfy they is, light and compressible they aint. But we split things between us and managed to fit dinner, Brukit, water, tarp, sleeping stuff, champagne, candles, torches, waterproofs, first aid kit, toilet roll and some clean underwear (we’re not animals!) in my Berghaus day sack and J’s bigger overnight pack. 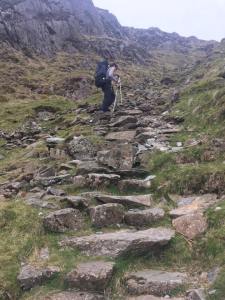 The route up to the cave is relatively simple, but it does lull you into a false sense of ease with the initial half an hour being flat or very gentle ascent. We knew from some thorough map checking that the ascending would be sudden and a bit painful especially with our heavy packs. Strolling along a track next to Brotherswater was very peaceful, it was a good time to switch up layers as we inevitably got too hot in the mild and cloudy late afternoon. After this track you go through a small-holding and it was here we got stared at by some very hearty looking cows and a mildly curious farmer on his quad bike. As you go further up the valley, you never really lose sight of where you’ve come from and in fact the wider valley and Ullswater itself come into view – it’s quite a sight!

Top Tip : Try to spot the cave BEFORE you start any ascending – it can be seen high up on the crag in front of you as you walk alongside Brotherswater – it sits just above a diagonal sort of rock formation and loos like a black sideways oval. WHY? You can’t actually see the cave when you get into the last bit of ascending and a lot of people actually don’t end up finding it because they have no clue where it’s supposed to be!

We followed the stream up Dove Crag, crossing it twice before coming to some steep rugged stone steps. We were both using our walking poles and I definitely recommend this – especially with heavy bags on your back. Also – its quite a sweaty hike up even in mild weather so fill up another water bottle as you cross the stream the second time, it’s the last water source before you come down tomorrow morning and if you’re anything like me – no one deserves a dehydrated Hannah to contend with…

But anyway, as you reach the top of these steps you’ll come to a sort of grassy mini-valley with an small algae filled tarn, and it’s here you want to head up to your left to find the path that leads you up and around to the front of the crag and to the cave itself. There’s a little outcrop of land which makes for a rather cool photo, and up the small scree path to the cave itself and wa-la – you’re there! 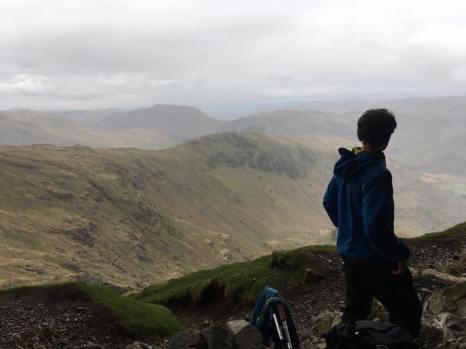 Looking out from the cave

Just below the cave looking out to Ullswater

We weren’t really sure what to expect, as everything we could find online was pretty old and sketchy about what you’d actually find – apparently there was a rather large guestbook in an old army chest at one point but that has now been replaced by a large sandwich bag with a notebook FULL of signatures and messages. I really want to tell you it was like a mini paradise, hidden away in cliffs and all special and cute but in reality, it was a cool place to sleep in terms of the view and location and the fact it was outside, but actually it has seen better days I would say. People have obviously not treated the cave with much respect with the remnants of fire’s in a few places and the strong smell of burnt plastic hanging about. There were also some chucks of broken glass, cans and bottles left behind and fag ends about. It wasn’t a tip, but it wasn’t the hideaway we had hoped for.

After a bit of spring cleaning, it was home and we settled down to make dinner on the Brukit. We found on coming down the next morning that we were very lucky to have the cave to ourselves that evening; it seems its quite the local legend and is often home to a few groups of a weekend. Dinner was lush and always makes it feel like we’re properly away (because we eat the same things every time ha) filled pasta, pesto, spinach and smoked sausage washed down with champagne. Minus the Champagne this is our go-to meal but because we were idiots, was eaten out of the brukit pot because we’d forgotten bowls, ahh well life could be worse I suppose! 😛

As night drew in, we light the candles and made quite the cosy little nook for sleeping. Toilet-ing is an interesting endeavour up in the cave, as a small ledge runs around the outside of the cave and round the corner – let’s just say don’t be that guy, just stick to number 1’s… Aside from toilet activities, bring a tarp if you plan on using inflatable roll mats as we did – prevent those punctures and dusty kit!

Now, both myself and J will hold up our hands and admit that the dark is not our favourite thing in the world, and coupled with being on our own in a remote crag there was ample opportunity for one of us to freak out. All I’m saying is, it wasn’t me 😉 I felt surprisingly rational as we felt into what was not the greatest nights sleep, with my only issues being that I kept convincing myself that I needed to wee and that I was going to fall off a cliff if I ever went, and how I would have to wake J up and make him be my safety buddy hahaha. We tried our hardest to pack all foodstuffs up and seal them away but apparently this wasn’t enough, and as the sun rose through the clouds J turned to me and told me about his midnight ordeal of noises near his head. I laughed, dismissed and chuckled some more at his panics (I know I’m a terrible person), and it was only a while later as we were packing away that he held up the knawed-through bag of mini Reese’s that were near his head all night. Ah. Well, yes. That’d do it. Sorry babe 😛

After munching morning porridge and with significantly lighter packs, we headed down to walk along the ridge opposite the cave and descend by an alternative route. As we walked along the windswept ridge, meeting a few lovely locals along the way, I reflected on our night in the Priest’s Hole. It was an adventure, a very good maiden bivvi voyage and a cool place to write a blog about – we both agreed this much. It’s location nearish a road and an easy trail are undoubtedly the reason for it’s slightly fatigued state, and from what we heard from chatting to he locals on the descent we were very lucky to get it to ourselves on a Friday night. I would definitely recommend going if you can, because when can sleeping in a cave overlooking some fine Lake District scenery ever really be a bad thing? But don’t expect a famous five paradise – you’ll need to go more off the beaten track for that (challenge accepted!). Bring on more bivvi adventures I say! Probs won’t be taking the champagne next time, but hey, never say never eh?

We finished off our weekend with an ascent of Helvellyn via Striding Edge, an incredible pub lunch at The White Lion in Patterdale (highly recommend this place!!)  & thoroughly knackered ourselves out before Campercar-ing near a stream for the night and retiring to Greggs in Penrith the next morning to sustain our weary bodies. I love the Lakes 🙂

How is seeing dolphins just so magical!? Our first sighting here in NZ and totally by accident. After spending the night swatting sandflies on a non description part of the west coast, I wandered across the deserted highway early in the morning to see the sea from the van, and BOOM about 15 dolphins in small groups all over the bay. #dolphins #magic #spotted #nz #happy #adventures #travel #vanlife #westcoast
Hokitika Gorge 👌💙 #nz #hokitika #southisland #exploring #adventure
Tramp tramp tramp. NZ tramping cherry popped properly on a overnighter to Cedars Flat Hut 😁 Turns out walking in here is kiiiindaaa different from back home. But awesome views, hut and company so a good 2 days had! #tramping #toaroa #nz #adventures #hiking #exploring #pooped
Wild wild west coast, these are *scenery/surf/drives/jungles/glaciers* I love the most... #snoop #westcoast #newzealand #hokitika #beach #travels #exploring #adventures
Ed Sheeran meets Narnia... #castleonthehill #castlehill #narnia #exploring #escapingtherain #nz #travels #rocksfordays
Pancake Rocks, touristy yet really cool?! That's a first. Awesome morning wandering across rock bridges carved I to the cliffs to see these. The West Coast is rugged and beautiful and everything it says on the tin ha. #westcoast #nz #pancakerocks #travels #exploring #vanlife