It was a Saturday was a day of two wakeups for me, the first being at 6:37am when J stumbled home lamenting the half a pizza he’d left somewhere on his night out, and the second less than two hours later when it was time to go Mountain Biking for the first time. Sam was at the door so we thought we should probably drag ourselves up and out of bed. and do this mountain biking thing that he’d been hyping to us all week.

This was a rare opportunity to experience something TOTALLY new for me, and so much like the freshers we throw down rivers every year I had little idea of what I was getting myself in for. We headed to Llandegla, hired our bikes, ate a bacon sandwich and pootled over to the Pump Track to get used to rolling over bumps and jumps. As someone who rides a Peugeot road bike from the 70s day in day out, the differences were crazy and it kind of felt like I’d forgotten to ride a bike for a while. For starters, the handlebars – AMIRIGHT? Jheez they’re actually longer than my arms – I felt like I was steering some sort of monster truck when I first jumped on. Also, having the ability to go over bumps without wincing and hoping your tyres don’t catch and flip you off, who knew right? The hired bikes were (so I’m told) pretty damn decent ‘hardtails’ (only front suspension) and super bouncy (although this probs isn’t the technical term so I think I’m exposing myself here ha) and they could go over pretty much anything and take it in their stride. 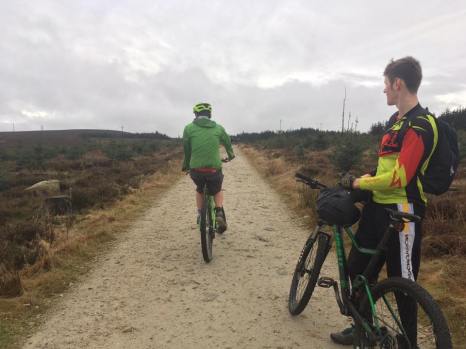 After a few laps of the Pump Track (and a nervy first go on the Northshore) we began the ascent through the forest. Having never been to a MTB centre I was impressed by how well it was set out and how successfully the track had integrated with the forests and hills. I didn’t really know what to expect but it wasn’t this.

The up hill wasn’t horrific, no shame in walking 😉 and when we reached the top we decided to try the Red Trail (not the hardest, not the easiest, sort of like Skiing grading).  I cycle to and from work everyday so am no stranger to biking, but this felt completely different. Taking the first few runs slowly whilst the boys sped off ahead, it was exhilarating and terrifying seeing rocks, drops and bumps coming up and KNOWING you’re going to have to go over it somehow.

I wasn’t very good at standing all the way up out of my seat, it was more like a one legged stand out of seat thing. Definitely something to work on if we go again! The thing about biking is that, unlike skiing or kayaking or climbing, once you’re on the track going down there’s really no way of stopping or getting off. It was this,rushing inevitability that I wasn’t quite sold on, there was only one way and you were on it for the course. The long sweeping turns with jumps were easily my favourite part; linking turns and rolling over jumps made you feel like an ok biker ha.

After a whole 19km of Red Trail biking, with no major spills, we were utterly knackered and there followed a much needed coffee and chips in the cafe at the bottom. It was a long, muddy and hard day but I’m so glad we did it. Having Sam (a Llandegla regular)  there mad a huge difference, and I would really recommend going with someone who knows the course when you do one.
My parting thought of the day: full face helmets: I finally understand why.

Bea-ter-ing ; the art of swimming in 420 cumecs of nz white water... In conclusion, yesterday was the worst swim of my life on a rapid that somehow had rocks, crashing waves AND whirlpools simultaneously?! 🤷‍♀️ #kayaking #beaters #nz #whitewater #queenstown #dogleg #bootybeer #appeasingtherivergods #swimmer
Photo/shuttle bunny days aren't so bad 👌😎 #kayaking #queenstown #newzealand #dogleg #boating
Queenstown Hill, ya beauty. #summer #QT #NZ #travels #happy #blueskies #whataview #exploring #touristing
Album dropping summer 2020 🤛 #fivebadboulderswiththepowertorockyou #moerakiboulders #nz #travels #eastcoast #patagonia
The hype is real, the moeraki boulders are hella cool. Still none the wiser how they're so damn spherical, even if I did read the sign! Awesome evening beach strolling, jumping and self-timing cameras to perfection 👌 #moerakiboulders #exploring #beachwalks #vanlife #nz #adventures
Back on the road and back down south to reunite with @flashjordan5 after some tv work in Welly! One hell of a landing in QT yesterday - emergency landing abort and the worst turbulence I've ever experienced meant we spent yesterday stationed in a few QT bars calming my nerves ha. Now escaping the rain (& planning bunjee jumps...) and heading East and South for a while. #vanlife #happy #queenstown #rain #beautiful #scenery #ontheroadagain #nz #travels #exploring #adventures