As I find myself sans employment at the moment, adventures have taken a slightly different form; weekdays are suddenly totally acceptable days on which to do things, stay up late and generally do all the things I was doing as a student when I should have been writing essays! After a  stressful almost-fortnight of job searching/house viewing/ stressing and moaning, our lakes getaway was spontaneous and much needed. 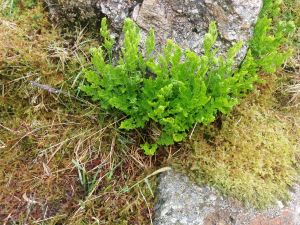 This is a plant. J thought it was interesting so took a picture (he does things like that). No, we don’t know it’s name, why spoil the mystery?

We drove up towards Kendal in the late afternoon, with weather not promising anything special we were once again sticking to walking with climbing shoes and chalk for some indoor insurance just in case. I absolutely love the Lakes, it has a slightly different atmosphere to Wales I think though it’s hard to put your finger on it. I like that it reminds me of my Yorkshire holidays as a kid, but also that it’s so pretty (and no one makes you feel awkward when they bitch about you in Welsh ha). My favourite town is Ambleside, so we headed there and scouted out a good layby on the way with a view of Windemere – winning! Hungry and with the rain pouring down,we parked up outside the YHA and cooked another Brukit one-pot dinner out of the boot. We happened onto a winner in Brecon a few weeks ago with filled pasta, pesto and smoked sausage, I did add some spinach this time because you know, vegetables. A pint in the YHA bar later (a solid favourite of mine after so many Merrell training weekends there as a student) and we were ready for bed so headed back to the layby, manoeuvred into a corner and set up campercar for the night. There were also no dodgy dogger-looking people, props for keeping it classy Lake District.

The next day I wanted to do Scaffell Pike, but Jordan had different ideas and unbeknownst to me had planned a route walking up the Esk to see waterfalls. What’s wrong with that? I hear you say. Well, to get to Eskdale involved not one but TWO ‘passes’. You know those little ‘V’s on the map on roads, yeh they’re pretty damn steep. The old gal has plenty of pluck, but there’s only so far good intentions can get you… The first one almost sent the car temp through the roof so when we arrived at the base of the Hardknott Pass and saw a mess of steep hair pin bends, needless to say I put my foot down… Diversion taken, we decided on a Plan B hiking up the Old Man of Coniston (which definitely most certainly had absolutely nothing to do with the really nice pub at the bottom of it….). Parking up in Coniston, all was quiet around the town, and we managed to bag a parking space in front of aforementioned pub (great stumbling distance 😉 I joke)  and made a quick mental note to bring a chopping board next time as I balanced sandwich making on packets and our new hippy cool bag- the stuggle is real.

The weather was pretty humid, but the sun wasn’t coming out to play as we started off up the side of Church Beck (excellent gorge walking spot, just try and avoid the money grabbing land owners if anyone asked, we were always MUCC 😛 ). The old man maintains a fairly steep gradient for the most part, and the path varies greatly between roughly hewn stone ‘steps’, slabby rock and dirt track. There are some great spots to stop and take stock of the view, with the old mining cables and carts rusting away down the hillside it makes for a different kind of walk and scenery. We explored what must have been a hillside halfway station, it was roofless and mostly wall-less but still a cool little exploring spot.

The locals are very obviously regulars on this one, and we were quickly overtaken by two guys with dogs (hey, they had canines pulling them ok?) who easily beat us to the top. It wasn’t as easy as I thought it would be, and we were pretty glad to reach the top. Naturally it had suddenly clouded right over and visibility was just a few metres as we stood next to the summit cairn in expectation, story of our lives really ha. But anyway, we hunkered down in the shelter of the summit marker and had our summit sandwiches before moving off along the ridge to descend a different way. Visibility was terrible and we were grateful for our map as all we could do was follow the cairns before veering off into the abyss to our right for a Devils Kitchen-like scramble down.

Typically, it brightened up as soon as we got halfway down (did someone say sods law?) and after laughing slyly at a woman some way in front slipping on her arse, naturally the mountain gods returned the karma and I found myself in the mud, on my bum. Lesson learned, I proceeded with caution and we headed down to the reservoir shoreline to explore some huuge boulders and marvel at the crystal clear water. There was some less than sincere talk of going for a dip, but neither of us were really onboard with it – maybe in summer? After reccying some potential bouldering problems, we walked back down towards the village quite knackered and collapsed onto the pub sofas pints in hand.

Until next time, #campercar out. 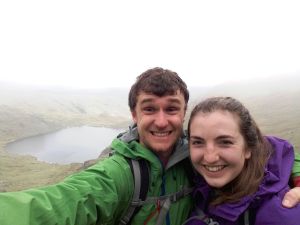