The adventure continues on Day 2 of our Scottish fast packing adventure along the West Highland Way. What I’ve realised whilst writing these posts is that there were just SO many elements of our trip that I hadn’t really reflected on, and so trying to decide what to write about is actually incredibly hard!

After yesterday’s mammoth first day, we needed a short one – both physically and mentally. Getting up and out took a while as we inevitably faffed, repacked and snacked.

Finally, we set off out of Cashel campsite and along the trail. Day 2 was spent winding our way along the shores of Loch Lomond – the paths often fraught with slippery tree roots and rocks galore BUT for me this was one of my favourite days terrain-wise. Galloping down steep winding trails I was in my element and often forgot all about the bag on my back (although the aching shoulders were a reminder whenever we stopped and it came off). The welts on the back and shoulder seemed to be holding steady, and between us we began figuring out ways to adjust straps on our bags that made it more comfortable.

Being loch-side was kind of magical, with the water lapping at the trees and tiny beaches that bordered it, but at times the tricky terrain got the better of us and we had to slow to walking pace to avoid face-bracing our way off rocks. It was steep and slippery, and sparked a fair few injury niggles among the group, as well as testing an incredibly achey body.

The food situation was an interesting one as we decided that we didn’t want to carry the weight of all that we would need, so decided to time our days with lunch pub stops if we could. And so it was as we crossed the waterfalls into ‘Inversnaid’ (it’s really just the hotel) we gratefully stumbled into the walkers bar. Pints of pepsi, burgers and chips were inhaled as we wandered around fellow WH way-ers in our socks. An hour and a half later, we heaved our bags back on and stumbled our first few steps on the last stretch of the day to Doune Bothy. 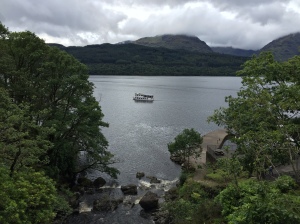 It became a bit of a ‘thing’ as the week went on that our navigational distance guessing was seriously wanting, even with the map ha. Today was the start of that as we kept expecting to see the Bothy around every corner. ‘WHERE IS IT?!’ we would exclaim every few minutes as just more trees appeared. It finally appeared though, and I for some reason panicked that there wouldn’t be any room so decided to sprint down the grassy boggy hill hallooooing a greeting to a walker pair that in my head, were about to score the last spots in the bothy. (They were not. I was being a mad person. Ellie and Fi did not feel compelled to sprint finish. We scored prime spots.)

It has been a dream of mine for years to sleep in a Bothy, and as we unpacked and nestled on a wooden platform bothy life was mighty fine. It was nice to not be focussed on protecting our gear from the rain, just the mice! Surrounded by an international crowd of walkers, we had a great night in our very first bothy.

One thought on “Day 2 – Fastpacking the West Highland Way”